A Quiet Place Part 2 Review: A worthy continuation that leaves room for the next chapter

A scary ride with a lot of depth..

About three years ago John Krasinski and Emily Blunt’s A Quiet Place came and shook up the horror landscape in a way that only Get Out had done two years before: adding layers to a genre that for many boils down to people being killed off one by one in the most nerve-wracking ways possible. Instead, A Quiet Place added what was a story of family, tragedy and survival which deserved all the praise it got, and more importantly, possibly could have ended there, with a sad but cathartic ending that didn’t need a sequel. And yet here stands A Quite Place Part 2 , a movie that answers the question of whether you should exist with a simple answer: Yes it’s great and it makes you yearn for more. The movie starts off with a prequel scene to before the first movie started, showing the beginning of the alien invasion that eliminated most of the human race. It’s a frantic, adrenaline fueled sequence that perfectly highlights the hopelessness and panic of a town in disaster against a threat it does not understand and goes to further remind the viewer how things got so bad. It then picks off exactly where the first one ended, with the aforementioned sad note but quickly reels you back into the story of the Abbott family and the post-apocalyptic rural America that they live in. They soon run into Killian Murphy’s Emmett, a man they knew before the world fell apart who’s lost everything in the chaos despite trying his best. He’s a broken man defined by his loss and guilt, unable to help others or let them in due to those feelings, as well as the fact that the world itself has become a much scarier place, with humans killing each other for resources when the alien monsters aren’t killing them. Murphy’s Emmett adds a fresh and interesting dynamic to the film, where in the first movie it was defined by a man trying to keep his family together and safe in a world full of literal monsters, here you have an outsider and loner essentially roped into the dynamic of a family surviving on their own in a world that seemingly continues to become more dangerous. It’s a worthwhile change as it shows more to the world and characters of these movies , with Emily Blunt’s Evelyn Abbott being a strong but in many ways believable leader for her family. Her character isn’t suddenly unstoppable like Terminator’s Sarah Connor for example, in fact she’s very much as scared as she is in the previous movie, but like a real human being, she’s learned to use her experience and conviction to power through said fear which makes her far more relatable as a hero. The only person who outshines her in this aspect is her daughter Regan played by Millicent Simmons. Regan was an emotional core for the first movie, and while not exactly serving the same role, she definitely becomes the dedicated optimist/hero of the film, deciding to find a way out of their situation as opposed to just surviving. This puts her at odds with everyone of course, especially Emmett , but that’s what leads to their relationship being special, with on some level both of them finding a replacement father and daughter for the people they lost. In fact, if you were to tell me that the scenes with Emmet and Reagan were in fact footage from a The Last of Us movie, I would be thrilled because the performances from both actors could sell me on their work. 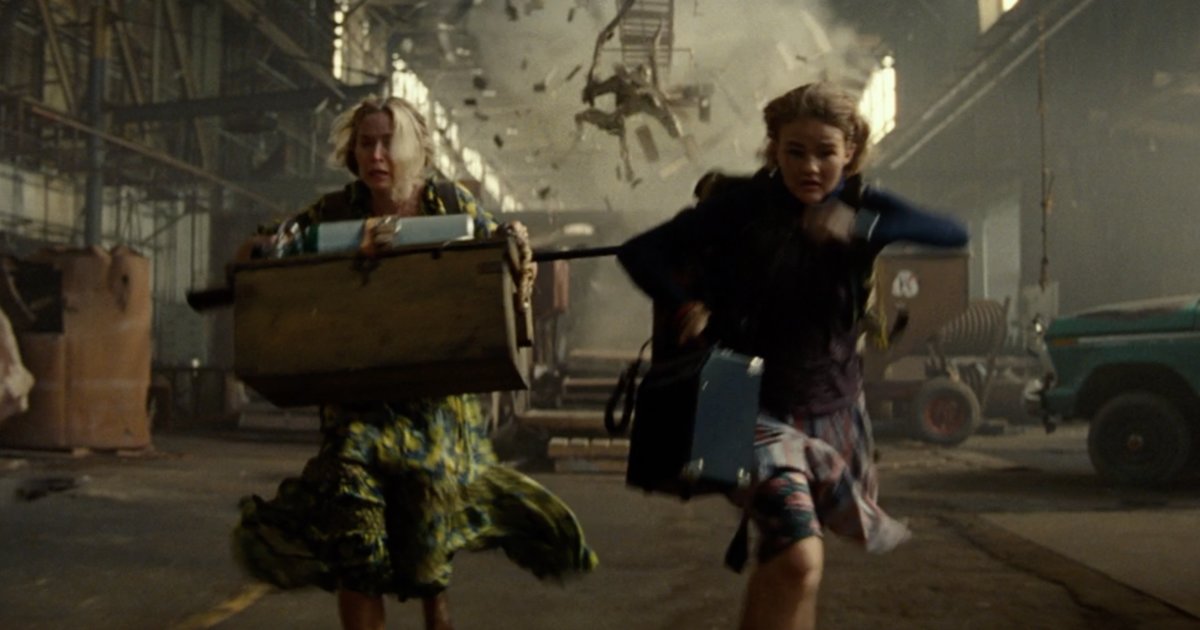 And to be fair, this film aims to be a sort of Last Of Us , post-apocalyptic inspired piece more so than its predecessor. There’s more of an emphasis on the aspect of survival in terms of finding resources as much as there is in simply staying alive. The evolution of the Abbot family to live in this world shines to. From the way they walk to how everything is carried and handled, you’ll be sold on the need to be quiet like in the last film and almost always want to scream” NO” each time a loud sound is made. It’s that same level of immersion that makes you feel a little hope when the movie even tries to present it, even if it’s just bait to make you feel a little more crushed after. The film puts you through a roller coaster of emotions, from deep character moments to each time the monsters appear and literally run and rip through people like they are made of paper matchet. Even with weaknesses discovered from the first film, they’re still walking harbingers of death that seem to cut through everything and make everyone feel helpless. Which is why each victory against them feels like one you share with the movie’s characters. I know I personally let out a few sighs of relief. Add in the sound design of this movie making certain moments feel claustrophobic while others have you feeling like everything is being ripped apart behind you and you realize that this is a movie that you need a cinema or similar audio setup to get fully immersed in.

In the end, A Quiet Place Part 2 essentially earns its title and it’s worth quite nicely then, being the now much needed continuation to a horror masterpiece that hooks you through it’s characters to simply want to see how they progress in this world and where it all ends. It may not be as groundbreaking or even heart-wrenching as it’s predecessor, but it certainly continues the story of the Abbotts and their trek through a world that definitely deserves more exploring. You should definitely check it out if you’re a fan of the first movie and if you’ve never watched either, now is a good time to start on both. Check it out at your nearest Ster-Kinekor.

It’s competition time again! Ster-Kinekor an TZP are hosting a competition for all our movie review readers. This time the rules are a little different, you have to tag a friend you would want to go to the movies with , follow Sterkinekor and TZP on Facebook and Twitter and answer the following question:

Which two things did we say define Emmett in A Quiet Place Part 2.

The Misfits Review : Introducing a whole new team of outsiders into the exciting world of action adventure

Which movies to watch before Avengers: Endgame (and their order to watch them)