Especially if you’re playing on PC…

Last year, the much-anticipated Square Enix Marvel’s Avengers came out to a millions-strong fanbase that had been barely able to stay in their seats since it’s announcement in 2017 and despite it being a game based on arguably one of the strongest entertainment brands on the planet and made by an incredibly respectable and talented studio…it flopped. The game wasn’t necessarily bad but it lacked focus and polish, trying to be an engaging single player story driven experience as well as a never-ending Destiny challenging live game. It did okay at the former but fell on its face at the latter. So we decided to look back at the Marvel game that tried to tackle the Avengers almost 15 year’s ago and despite being made for far less powerful machines, actually pulled off it’s job and is still a far better experience. Say hello to Marvel’s Ultimate Alliance.

Developed by Raven Software and published by Activision, Ultimate Alliance was actually the third of a trio of Marvel games developed by Raven Software, the other two being X-Men Legends 1 and 2, which had also been critically acclaimed. Raven had created a reputation for engaging , 4 person action beat-em-ups with RPG elements that fit the superhero IP that Marvel had provided them with and Ultimate Alliance was arguably their best offering. While the past two games had them feature a wide range of X-Men characters, along with a guest starring Iron Man in X-Men Legends 2 , Marvel Ultimate Alliance had them run wild with what was essentially the Marvel A-list group of characters back in the mid-2000s. Everyone from Avengers stalwarts Captain America and Thor, to big X-Men characters from previous games, to the Fantastic Four and Black Panther to more niche characters at the time like Luke Cage and Spider-Woman. It was a long, sprawling list. So long that Raven actually had to spread it around a few platform exclusives and a DLC pack for the PS3, Xbox 360 and PC. And I know that technically means this game isn’t just an Avengers game, but come on in a time where almost every big Marvel character has been an Avenger in the comics at some point, this game actually does a better job of reproducing an Avengers roster in its 4-character missions than even Square Enix’s Avengers does. But characters weren’t the only thing that made Ultimate Alliance special. The game understood it’s character roster, setting and play-style in a way that made it an interesting and engaging experience for game and Marvel fans alike. Take it’s story for example. It’s arguably not as good as the new Avengers game, as that game’s story was the one thing it nailed, focusing on an MCU-like story that at least had some emotional beats to it. However what Ultimate Alliance’s story and campaign do well is keep you on your toes. While Square Enix Avengers players were complaining about being stuck Utah deserts for too long, Ultimate Alliance’s campaign and story took you from an exploding S.H.I.E.L.D. Helicarrier to Stark/Avengers Tower to the Savage Land, Thor’s home world Asgard, Doctor Strange’s Sanctum Santorum, Marvel’s version of Hell, the Inhuman’s home of Attlan , Space, and literally tons of other locations that at this point I just can’t remember. Combine that with a story where Doctor Doom teams up with literally almost every major villain marvel has to offer minus Thanos himself(but including and not limited too : Loki, Ultron, The Winter Soldier, Magneto , Doctor Doom, The Mandarin and many others). Raven put the extra work into putting all these settings and enemies to use as well, with villains sharing special dialogue if you had their arch enemy assigned to your hero team or other characters that share a connection to them when they encounter each other (eg Captain America and the Winter Soldier have their expected “turn back to the side of good” debate while Black Panther and Doom share a discussion about how better to rule a nation before the fighting starts). It’s all a lot of work that contributes to complimenting the Marvel Universe, going so far as specific perks being awarded to your four-person team if you can assemble a specific team from the comics such as the Uncanny X-Men lineup or the Fantastic Four. Heck the game has a mini-game in it where you gain more experience for your heroes and currency by literally asking comic accurate questions. 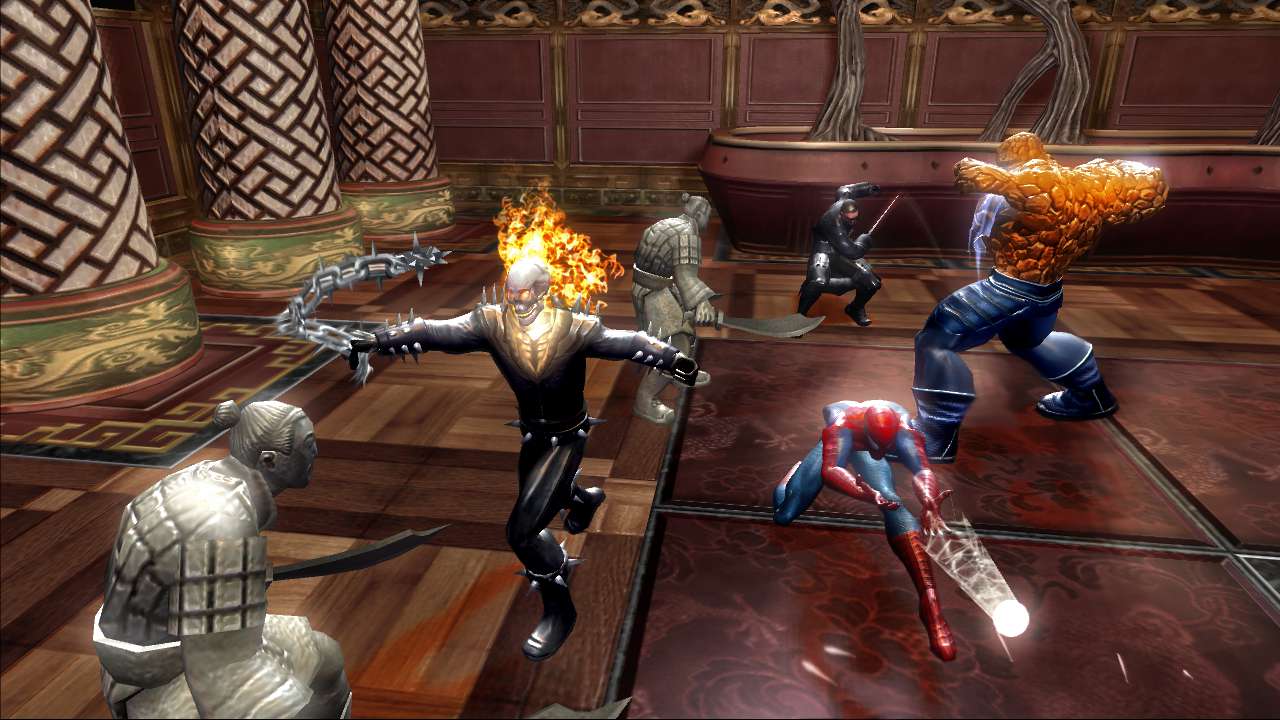 The RPG elements of this game, while light, also heavily feature into what makes it great. Square Enix’s Avengers tried to lean hard into being a Destiny competitor, but also stumbled when it couldn’t fully lean into that, offering non-cosmetic upgrades that did increase stats character stats but rarely seemed rewarding , while offering cosmetic upgrades as a separate perk that you could also purchase with real money. Now to be fair Square’s approach wasn’t the worst one, but it also speaks to the conflicted nature of their game, as they wanted ways to keep gaining money through cosmetics, while encouraging players to grind continuously while not being rewarded enough for their work. Ultimate Alliance instead kept it simple by offering players experiences and powers to keep them interested. A few extra heroes could be unlocked too due to story choices, allowing players to have even a few reasons to replay the game. It was a simple progression loop that to be fair, worked better 15 years ago than it does now, but it was easy to understand and didn’t confuse players the way the new Avengers’ loop does. Costumes were also an additional perk but limited to 4 per character, also having some character stat boosts, but again this makes sense in a world where micro-transactions weren’t a thing hence no balancing act had to be made as players wouldn’t have to pay extra just to get a character certain perks or even abilities. And to be fair, Ultimate Alliance had non-cosmetic upgrades too, specifically in the form of gear, but it did seem to make sense that it wasn’t as impactful, and while that is a minus in the sense of the game being an RPG, it still was largely overshadowed by it’s superior action game loop.

Then there’s playing this game on PC, and well, it’s a whole other level of experience, because on top of playing on PC offering the usual benefits that it does compared to other systems of the time (graphics and framerates that can be upscaled), it also brings a specific benefit that PC players will definitely love, the largest roster of characters, abilities, missions and skins all because of mods. In fact, remember how I said Raven Software split it’s roster to some specific consoles and platforms, landing characters like Black Widow as PSP exclusives while Hulk was a DLC character? Well, the PC version of this game was modded to feature literally every exclusive character from every platform especially since all the game’s versions shared the same source code and engine. So added to the roster would be the aforementioned Hulk and Widow, but also Magneto, Cyclops, Hawkeye, Moon Knight, the original (male) Captain Marvel ,Ronin, Venom, Nightcrawler and a playable Doctor Doom. It also adds their character specific side missions and even some special interactions, making it seem like they were always meant to be in the PC version anyway. And it’s probably the easiest way to play the game too, considering you either have to go back to the PS3 , or use digital download versions of the PS4 and Xbox One ports to access the game anywhere else. But those versions don’t come with all this extra content minus the official DLC pack, hence the PC version still reigns king. It’s even become the game’s biggest lifeline, with a modding community so passionate they have their own site, and have been modding the game far beyond a few extra characters. Users have created their own custom characters that were never in the game like Quicksilver, or just updated its visuals to match more modern games. There are even skins based on the Marvel Movie versions of characters so you have a Captain America that looks more like Chris Evans or a Wolverine that looks like Hugh Jackman. Marvelmods and this community have essentially made Ultimate Alliance THE game for Marvel fans to keep coming back to, and that happened all out of passion more than anything else.

So I’ve essentially talked about why Ultimate Alliance was a great game, especially compared to it’s modern day counterpart, but there’s also one thing worth noting here: It’s not even the Ultimate Alliance game. Ultimate Alliance 2 followed in 2009, being developed by a new studio and unfortunately also stripped of a lot of it’s key RPG and team customization features. It was a more cinematic experience with a story based on the Civil War story arc(yes the same one that the 2016 Captain America movie was based), but lost a lot of the key little things that made it feel more like a living breathing pocket of the Marvel Multiverse and more of a quick cash-grab game. Ironically enough this same formula was taken by Ultimate Alliance 3 as well, a 2019 sort of spiritual successor to the first 2 games, that took the second game’s formula and finally added Thanos and Infinity Stones based storyline a la Avengers: Endgame. It also added some more recent Marvel heroes as well, like the Guardians of the Galaxy and Falcon. But again what makes this Ultimate Alliance game special is again it’s identity. It had one, while the other two didn’t, and it showed it’s love for Marvel, it’s characters and the fans as well. The extra little bits of polish, the attention to detail in character abilities, interactions and team setups. The world tour of seemingly every major Marvel comics minus Wakanda (which was explored in the second game). And the endless ways that the surprisingly replayable multiplayer even went on to build on the meta-game through players finding out which characters compliment each other best when surrounded by other players. It was a game that celebrated the Avengers, and Marvel too, and if you get the PC version, it can likely keep you playing for hours in ways that feel a lot more fulfilling than almost every Avenger-themed game afterward. There’s multiple other great Marvel games you can play , from the new Spider-Man titles to the now overlooked X-Men Origins: Wolverine, and in many ways those games will represent their hero the best way they can. But if you want your best fix of Earth’s Mightiest Heroes and a lot of other awesome parts of the Marvel Universe, the Ultimate Alliance is your game.

It's only competition is well..the games themselves..

It's not perfect, but it's quite special...

15 years old and the gold standard for Avengers games...

But you’ll want it now anyway.. So after almost a...

Zoom’s recently rise to fame and infamy are a tale both Zimbabwean start-ups and established giants could learn from.

Ryan Reynold’s Free Guy is a movie that imagines it’s like to be all those characters you kill in GTA.

What Spotify coming to Zimbabwe means for music streaming in general.

So we now know why Econet cancelled e-Learning bundles